It is hard to imagine what had happened to Fatima*. It is hard to describe the silence that swallowed the voices of the spectators of her death. I think the artworks on Facebook which had returned her head, portraying it as an orchard of flowers, a moon or a sun, tried hard to compensate for this horrifying silence, and to relieve Fatima, relieve her beloved ones, and relieve all of us.

What can be done for a little Syrian girl who had “lost” her head?!

What can be said to a little girl who had laid down on the ground in her dress, opening her arms, her small bleeding shoulders stuck directly to the wall..?

Fatima Meghlajj did not understand what had happened to her.

She wanted to feel the dryness of her throat to ask for water, but she could not.

She wanted to call a mother or a father, but neither did she find her tongue nor images of parents in her memory.

She tried to look around to ensure that she sleeps in a familiar safe place, while waiting for the end of this weird feeling of emptiness that stormed her, but neither did she find her scattered eyes, her eyebrows nor her eyelashes that had dispersed around the space of the cold room.

She did not even find the braid of hair that her mother had combed when preparing her for her uncle’s wedding that night. 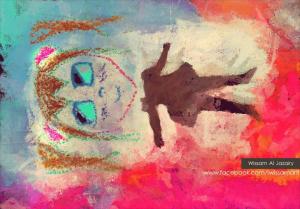 An artillery shell tore it off, allowing it not a moment to say goodbye to its Owner, or to apologize for having to take her words, songs, smiles, tears and drowsiness with it.

And so Fatima surrendered to her state of loss, to the death of her imagination, and to the end of her wait for gifts and a school bag. She realized that no more she would have the ability to do, to say, or to wish, after her head took off, after her body became an orphan, submissive, waiting for the soil’s warmth…

The Tyrant loves the people without heads.

The Tyrant loves the children without heads. In their heads, thoughts do not know fear and words never want to commit suicide. Fatima’s head was full of colors and laughs. He thus tore it out.

Those who stood silent in front of the uprooting of Fatima’s head must touch their heads every day. They must touch their children’s heads. They have to remember that a maroon hair, white teeth, and eyes which were looking for fun, have all faded away, not allowing the tender little body to gather them up and rejuvenate itself with them. 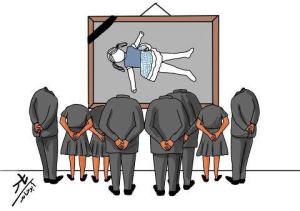 Fatima the little girl personifies the Syrian tragedy today. Her decapitated death is a daily death that claims the lives of dozens of the Syrian men and women, under the nose of the world, and in front of those who are angry, accomplices, hesitant, and powerless.

Fatima’s death is a possibility that is chasing thousands of her compatriots in Syria. Under the shadow of the eternal silence, the only way for them to survive and heal is by seizing their country’s freedom, that freedom which resembles their thoughts, their letters and their questions. Their only hope of escape is by toppling the Tyrant’s regime and by restoring some of the justice that has been suspended in Syria and around the world, the world which has been watching Syria for decades, for months. Only then, that horrifying explosion which has snatched a Head in a Syrian village will become a far memory that does not represent the possibilities and does not threaten the lives of Fatima’s brothers and sisters… Only then, Fatima’s death will become a story, folded tenderly, of a little girl who, for the future of her country’s children, sacrificed her head…

* Fatima Meghlajj is a little Syrian girl who was killed in the village of Kafr-Aweed (Jabal Zawyeh [Zawyeh Mountain] region) by the shelling of the regime’s air force. Many photos and videos show her body lying on the ground, without a Head.

Link to original article in Arabic