There are several levels of approaching ISIS’s crime of displacing the Christian Iraqi citizens from their land in Mosul (and the Nineveh plains) last week.

The first of levels is the crime per se. It’s a level of uprooting and expelling a group of human beings from their country in addition to what was narrated of marking their houses with letter “ن” [the first letter of the Arabic word for “Christians”], in an act of religious discrimination towards and against them. This of course encompasses assault and a terrible collective persecution against individuals just because they belong to a particular religious group.

The second level is the level of “targeting”; in other words the bullying of a small “group” of people powerless of defending themselves following the collapse of the “government” that was supposed to defend them and others. Accordingly, it is helpful here to expand for two points. Number one; this is not the first time Iraqi Christians get targeted in the last few years, for a wave of bombings has hit their churches and congregations in Baghdad and other Iraqi cities not long ago. The second is that Christians in Iraq, as in all the Orient have undergone continuous demographic decline for four decades, i.e. since the establishment of the tyrannical and oppressive regimes that claim to be “secular” or nationalistic or otherwise. But what is different this time is that the violence exerted by ISIS against them seems to be eradicative, at a moment of temporary change of political maps of which consolidating, since the declaration of the “State of the Caliphate”, requires witnessing the tragedy of an entire group’s displacement, similar to the one we already had. 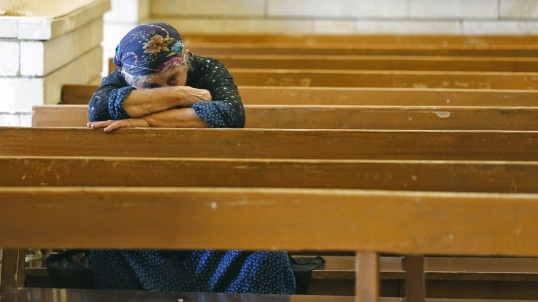 As for the third level, it is the one related to the context into which the crime took place. Although pointing this out does not aim in any way to making it look like a “relative” sort of act or minimizing its horribleness, nor to justifying any silence or hesitation in stance against it and against its perpetrators, yet it is important to remember that more than three million Iraqis have been displaced over the last decade, in addition to nine million Syrians since 2011, and that the majority of those are Sunni Muslims who were expelled by the sectarian fighting in Iraq as well as the barbarian suppression of the Assad regime in Syria, all together with the systematic abuse of ISIS in both countries seeking to “cleanse” the areas occupied by its Muslim rivals and those of different religion.

And this means that focusing only on Christians in isolation of the other displaced and dislodged Syrians and Iraqis, shall only separate them from their societies, and make them just as ISIS and the Assad regime intend to portray them: a “strange” or isolated group that needs to be expelled (in the ISIS case), or get intimidated and then claim to secure and protect them (in the Assad case).

While it’s understood that minority cases raise fateful concern within those “advocating for the rights of minorities” and within those who fear for their “existence” during conflicts, especially when they are vulnerable, but distinguishing them from others for pure confessional reasons does not serve their rights nor the rights of other millions of their fellow citizens and neighbors who, just like them, await their right of return, and who still await some justice…

Original article in Arabic can be found on Ziad Majed’s Blog.