A Comprehensive and Documented Report of

The report was originally published in Arabic by all4Syria

At the Sendiana Bridge over Quiq River, usually used by the civilians to move between Bustan al-Qasr and al-Zebdia Area.

At 07:30Am, the people of the neighborhood discovered many bodies floating in the Quiq River that were drifting in its waters. The people rushed to the Sabhan Mosque nearby, and announced the news through the Mosque Radio.

The inhabitants of the area and the Free Syrian Army Brigades gathered and started recovering the bodies from the river. Some people installed a grid at the river to stop the bodies drifting away by the current, as shown in the video below:

The sniper in the adjacent neighborhood of Eza’aa opened his fire at the people who were working on evacuating the martyrs from the river, forcing them to suspend the operation for around one hour, and then resume when the sniper’s shooting stopped, as shown at the end of the video below:

Bodies were moved to al-Zarzour Hospital, and to a makeshift hospital at Bustan al-Qasr, where the families of the missing and detainees went there to recognize the bodies, as shown in the video below: 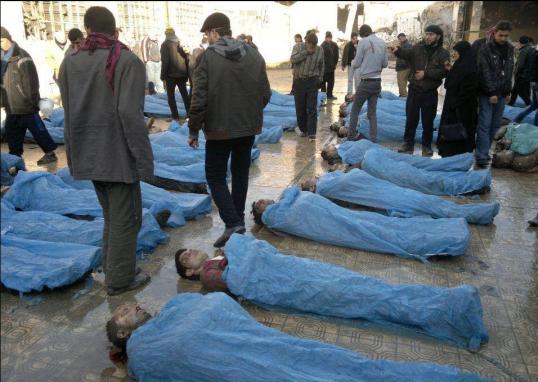 The Condition of the Bodies:

All the bodies were handcuffed, the feet of some of them were tied, and their mouths were gagged. Among them, there were many young people shot in their heads, and in some cases, in their eyes.

The heads of some of the bodies were covered with nylon bags, and others had adhesive tapes on their mouths and eyes.

Most of the bodies were recently deceased, since the color of their blood was dark red as shown in the video below. One of the doctors, who inspected the bodies, estimated that the oldest date of death was eight days before the discovery of the massacre, based on the marks appearing on the bodies.

Some bodies were completely disfigured, and some others bore torture remarks.

Moreover, there were some bodies who were still wearing leather belts and marriage rings, in addition to the presence of their shoelaces, and all these mean that the martyrs were not in prisons.

See more photos from the source

After handing over many martyrs to their families, it was discovered that 15 of them were missing over different periods of time, the longest of which was one month. Along with that, five of them were detained at the State Security apparatus at Aleppo after they were arrested at the checkpoints in the occupied areas. It was also recognized that two of the martyrs were mentally ill.

Activists in Bustan al-Qasr and al-Kallaseh neighborhoods have reported that the water level of the river during the twenty days preceding the massacre was relatively high in comparison to the day the bodies were discovered, where the level of water dropped, which indicates that water pumping was stopped and then restarted once again next day, as shown in the following video: 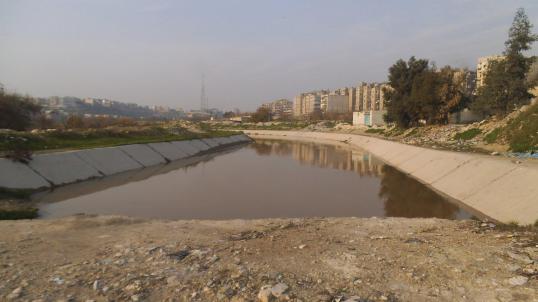 Photos captured on 12 January 2013, showing the water level of the Quiq River before discovering the bodies.

According to preliminary assessments, the bodies were thrown into the river from the Revolutionary Vanguards Park, located at the north of Bustan al-Qasr neighborhood, overlooking the Quiq River, and which is about 1.4km away from the location where the bodies were found.

This location is the nearest point to the location where the bodies were discovered, which is still controlled by the regime. The entrance of the park is demonstrated in the following map: 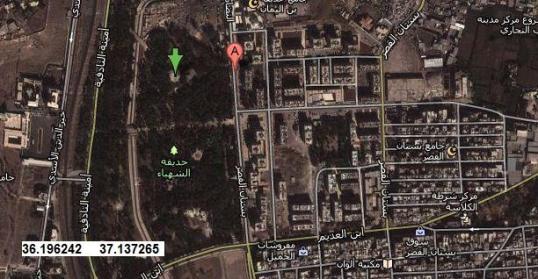 At the first stage of recovering the bodies, 59 martyrs were found, and then the neighborhood residents recovered a further 21 martyrs. However, another 20 bodies remained there because they were in a location that was difficult to reach due to the presence of snipers.

On Tuesday 29th January 2013, the toll amounted to 100 martyrs. However, another 7 bodies were recovered on Thursday and their head was bleeding. On Friday morning, 2 adversely disfigured martyrs were found, and they were immediately buried without filming.

Up to this, and according to the information we could obtain, the total toll of martyrs is 109, only 44 martyrs of them were recognized.

Photos showing the recovery of the bodies from the river:

A man talking about the massacre of Quiq River, near the martyrs corpses.

Videos of the Martyrs Funeral:

Videos of the Martyrs Burial:

Videos of the Funeral Prayers for the Martyrs: