True news and stories from Syria 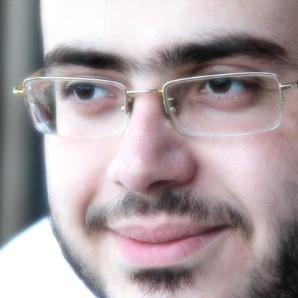 Long months of work, disagreements, conciliations, ill feeling, laughing, receiving news, exchanging invitations to our favorite, popular meals, and promises of celebration in the freedom square; yet I neither know his name nor his features.

I imagine him to be in his early twenties: nice and intimate; he is quick-tempered and quick to smile as well. He is too inquisitive to the extent that each time I had to beg him “son, please stop nagging”.

He, with all these aspects, has nothing to do with the name that we received yesterday for a young martyr that died under torture. Hasan al-Azhari: I don’t know him. He is just one of tens of names that pass daily under my fingers on the computer screen while documenting them.

My little friend’s name is Cold Mountain. I chose this name for him upon his request; a name related to winter and mountains, not really relevant to the environment of his coastal city: Lattakia. My little friend Cold vanished. I’m trying in vain to match his personality with Hasan al-Azhari, who died of torture, and whose obituary was printed even without the word “martyr.” A regular condolence ceremony will be carried out for him without the proper funeral that he deserves for what he did for the sake of freedom throughout the months of the revolution.

Cold was arrested on the 13th of last April. I did nothing for him; I didn’t even document his detention; I never asked about his name. Cold had to die so that I realize the massiveness of death that has gripped me slowly and crept through me like poison, each day eating away a part of my feeling of life and the living.

So what now after the documentation of one name after the other and launching a call after the other? I work as the grave digger who got used to bury the dead yawning and expose their obituaries in the museum of international organizations. Why is the international community so keen to record the crimes it is witnessing? Why is the international community so interested in this systematization and that accuracy in monitoring the victims’ groans and mummifying them in numbers, testimonies and charts? Why do I have to listen over and over to the testimony of a detained person narrating how he went through kicking, tearing, mutilation, and burning; how they jumped on his head, took off his nails, skinned him, or watched pieces of his flesh scattering around after beating him with their whips? Why do I have to record all that according to the applied “monitoring and documentation rules” and circulate them in the civilized world so that it feels sorry for us and prays for our mercy! To bless our professionalism and propose us more training. We are, in its eyes, the mercenaries of freedom: we need more rules, until we feel ashamed of ourselves because we are still not civilized enough and not non-sectarian as we ought to. We still don’t have enough immunity against extremism, and we cannot organize ourselves in a united opposition. Damn us!

Dear Cold Mountain: we are the intruders upon freedom when we burden their ears with the sound of your bones crushing.

I neither asked about Cold‘s name nor the date of his arrest nor its conditions. He passed like others… tomorrow he will be out or he won’t… the doors of jail do not close on anyone, but they often open to reveal dead bodies. Cold was nice and tender; he hated the idea of falling into their hands, so he prayed to be killed with a bullet or a missile. In my country, quick death is a privilege. When we made appointments over the internet to meet in the freedom squares, we realize that what we are saying is meaningless, because Cold won’t stay to fulfill his promise to treat us to a Falafel meal. Instead, we will announce his death and regret that we have neither known his name until he was listed with the martyrs, nor have we seen his features except for the documentation, nor have we answered his constant questions properly. A Syrian young man like him, 24 years old, has the whole life to wonder and discover; this is what human rights blogs and the principles of the international community say; the whole life, and not reducing it just to an experience in a cell, the tormentor’s whip, and a world staring at our suffering impudently, dear Cold Mountain.

This is not an obituary; this is just the continuation of a conversation that has never ended; an exchange of roles, where I ask and ask and, while you interrupt me with half answers. I go on asking until you stop me with a lot of irritation saying “please stop nagging”. 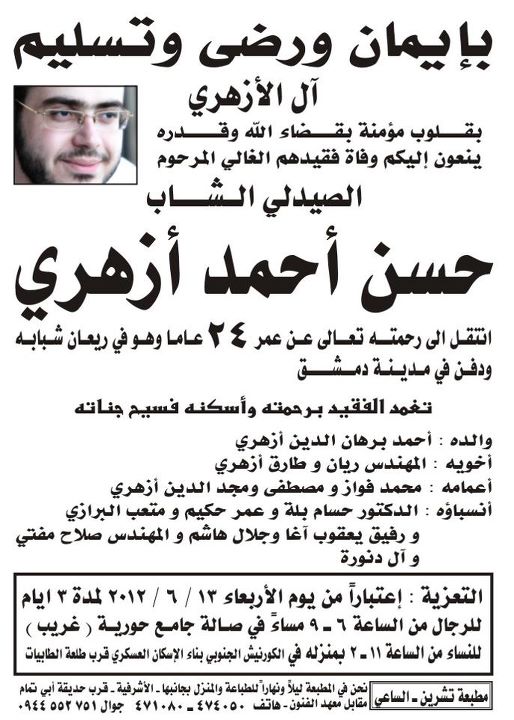 With faith, acceptance, and submission

Al-Azharis announce, with hearts believing in God’s will and predestination, the death of their beloved young pharmacist Hasan Ahmad Azhari who passed away to the mercy of God Almighty at the age of 24, while still in the flower of his youth, and was buried in the city of Damascus.

We pray to Him to rest his soul in peace and paradise.

Condolence are received starting from Wednesday, 13 June, 2012 for three days; for men from 6-9 pm in al-Houria Mosque, and for women from 11-2 pm in his house in the Southern Cornish