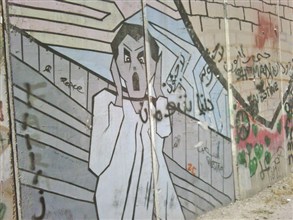 Amal (40 years old) and her daughter found safe passage to Jordan from the area of Bab Amr ( باب عمرو ) in the Syrian city of Homs, fleeing the killing spree that according to her took the lives of three of her daughters at the hands of the Security Forces and those who are known as the Shabiha .

«Youth / Shabab» supplement observed tales, shrouded in the heavy dark Damascene night, of Syrian women raped and murdered, to convey to you their and their families’ ‘rare’ testimonies.

In a small room in one of the homes that house Syrian refugees in the Jordanian city of Al-Ramtha, a city that is adjacent to the Syrian border; sat Amal gazing towards a small balcony through which she could view the landmarks of cities burdened with acts of killings and displacement, remembering that “nightmare” that materialized in the rape of her daughters before being slain.

In a weeping voice, the grieving mother yells hysterically “The security forces and Shabiha ousted whole families from their demolished homes, they started to forcefully strip my daughters before raping and killing them”. She added affrightedly “They were mockingly saying: You want freedom? This is the sweetest freedom”.

“The wailing and weeping filled the place, and the begging of children and women were all attempts that failed to illicit any emotion from the criminals” stated Amal without explaining how she was able to flee from the executioners. “I could not control myself when I saw them slitting their throats with knives … I fell to the ground, unconscious” she added.

She then adds in a grief struck tone that her daughters Aisha, Dua’a and Ruqaya “were murdered in cold blood because their father had joined the rebels’ ranks” assuring that “thousands of Syrian women who have been imprisoned in Syria did not escape rape or humiliating treatment”.

Syrian refugee Muneera’s (39 years old) story does not differ from Amal’s. Both have tasted the bitterness of parting with loved ones and she has stood helpless while her daughter was raped and killed at the hands of the “Shabiha”, according to her account.

Muneera who is using an alias – for fear of shame – tries to gather her sorrows in that small room of the dwelling near the border that was provided by a charity in Al-Ramtha for the people who have fled from the unknown in the neighboring country to the north.

Muneera who comes from the city of Hama [a city in central Syria], recounts how on that day that was haunted with the stench of death “the Shabiha raped her daughter Tasnim (who was in her twenties) fifteen times before they strangled her to death”.

Muneera raises her palms to the sky hoping for the “relief for her people from anguish”, while she continues to recount similar stories of women and girls in Syria being subjected to rape.

Asma’a (20 years old) was blessed with surviving the massacres throughout the country to tell her shocking tale with four Syrian soldiers who raped her publicly in front of the residents of Al-Khalidiya neighborhood of Homs [a city in central Syria].

She speaks from the border city of Mafraq, stating that she escaped “certain death” due to her siblings’ participation in the revolution. She remembers the night she escaped to Jordan under the cover of fog and thick darkness with her family and 300 residents of her devastated neighborhood bearing (according to her) “evidence of the gruesome situation in Syria”.

The girl continues with a lot of sorrow “with their heinous act they have killed my dreams, my future; they killed the joy in me”.

Behind the wall of silence whose existence was enforced by the killings and blood, another rape story is revealed by Basma (26 years old) who fled along with her aging mother from one of the small neighborhoods of Daraa, which is located only 2 km from Jordan.

She states, with signs of fear obvious on her pale face, “on the 5th of April of last year [2011], a convoy of tanks were roaming the village we live in, they were firing in all directions. Tens of civilians fell dead soaking in their own blood”.

Basma says she wished death a thousand times “than to be stripped of her clothes and to have fallen prey to criminals deprived of their humanity”.

She adds that the Security forces and those who are known as the Shabiha, “are escalating their brutal campaign in little known remote villages, far from the major cities, by closing schools and shops, continuing the shelling, and raping women and children”.

Zayed Hammad, the President of ‘The Holy book and Sunna Organization’ (Al-Kitab and Al-Sunna Organization), who are tasked by the Jordanian government to provide aid to thousands of Syrian refugees, says that his organization “provides medical and psychological assistance to many refugees who have been raped at the hands of the Syrian President’s militia”. He also confirms to «Al Hayat» the commencement of work on opening two clinics in the city of Al-Ramtha for the purpose of working with and treating rape victims for the ongoing trauma resulting from the attacks that they have been subjected to.

Hammad reveals that according to a social study being conducted by his organization, the age of the refugee rape victims ranges between 15 and 29 years.

He also explains that his organization, which receives relief donations from the Arab Gulf region for the refugees flowing in, provides a variety of psychotropic drugs, particularly for the treatment of depression diseases.

Hammad reveals the tragic story of a mother of a rape victim, quoting the mother who receives periodic aid from the organization, that her daughter “was raped 10 times by the Syrian soldiers, before they killed her in front of by-passers in the street”.

According to Hammad, there are no accurate figures on the number of raped Syrian women who came to Jordan for refuge, but he says that “the continuing violence in Syria will compound the tragedy of the victims of rape”.

The United Nations Relief Agency Office in Amman confirmed they are working towards establishing centers that provide psychological help for Syrian refugees and their children to “rehabilitate them back into society”.

The Jordanian government states that around 120,000 Syrians have entered the Kingdom since the outbreak of the events in Syria mid-March last year [2011], and most of these refugees are staying with their relatives in the cities of Al-Mafraq and Al-Ramtha, north of the Kingdom.

6 responses to “Female Syrian Refugees in Jordan: We were Forced to Watch the Rape of our Daughters”