A Q&A with Razan Zaitouneh 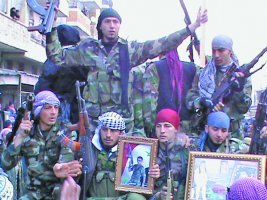 The Malek Al Ashtar division is one of two battalions under the “Syrian Free Army’s” Khaled ben Al Waleed brigade in the city of Al Rastan north of Homs. Its leader, Hasn Al Ashtar, is one of the most wanted individuals in the city. He has suffered various forms of persecution along with his extended family since the first few months of the revolution. This conversation sheds light on some aspects of the work done by the “Free Army” in Al Rastan, the negative aspects being attributed to it, and the debate on whether to militarise the revolution or keep its peaceful nature.

R: How did you and your family end up being ravaged and targeted by the regime?

– H: Our family played a major role in igniting the revolution in the city of Al Rastan, considering that my father is one of the city’s notables. Around April last year, I, my brothers and cousins started writing few anti-regime slogans on walls of school and public departments. About one week later we went out with some friends in the first street demonstration. At that time, the security forces detained my brother Youssef and then negotiated his release with us in return for stopping the demonstrations. My father agreed and we could not disobey him. My brother was thus released on the same day and we did not demonstrate on that Friday. However we did demonstrate on the following Friday as the crisis in Dar’aa was at its peak, so we swore not to retreat. Then my brother Mohammad was arrested and appeared on Syrian state television as the leader of a terrorist organization. We were informed, via a person working in the security forces, that arrest warrants were issued for me and my brothers.

R: At that time your activities were limited to peaceful demonstrations, when did you make the decision to turn to armed activity and why?

H: That was around the end of April after the massacre where 19 unarmed citizens were killed in the city.

The entire city was affected by the crackdown

R: Was that the time when the regime’s crackdown on your family commenced?

H: They cracked down on the entire city. When my brother was injured in front of my own eyes by shrapnel from a nail bomb, I could not do anything to help him except to carry him to one of the houses after being kicked out from many others as their owners were too afraid to take him in.

My father was detained for eleven days, released, and then became wanted again, although he is 79 years old. He was tortured and humiliated in many ways during his detention. For example they kept him standing close to ten hours while being handcuffed and blindfolded. His arrest was to force him to reveal the whereabouts of his sons.

My eldest nephew Mnawwar, who is fifteen years old, was injured by shrapnel from a tank shell that hit his house during the second operation launched on the city last September, and instantly he lost his left eye and his face was deformed, and he is at risk of losing sight in his other eye unless he undergoes a number of surgeries. His brother Hazm was injured in his stomach, colon and bladder in the first operation launched on the city. He was arrested along with his father and his health is very bad. Their fate is still unknown to this moment.

My nine-year-old niece Huda was injured in her face and eye during the second operation on the city which partially blinded her. She needs surgery, while her father is still detained and his fate remains unknown since that operation. My fifteen-year-old nephew Kassem was martyred during the second operation by a gunshot from the army and laid dead in the street for around twelve hours because nobody could reach him. Later we received his corpse from the morgue of the military hospital in Homs. His father is still detained, we do not know anything about his fate and he does not know that his son was martyred.

My brother Mosleh is detained and we also do not know his fate and the rest of my brothers are high on the wanted list. The army and security forces occupied our homes and the houses of my uncles and cousins after they stole all of its contents and broke doors, windows, and some walls.

R: What is your role as a battalion attached to the “Free Army” in the city of Al Rastan?

– H: The demonstrations are still ongoing, and the number of the participants is increasing. Our mission is to protect the demonstrators in addition to selective armed operations.

R: What is the number of civilians and military personnel in the battalion?

H: Around 400 people make up the battalion; approximately half are civilians and the other half are military personnel.

R: What is attitude of the locals towards the battalion?

– H: The vast majority of the locals support us and we have not done any operation without their consent.

R: Recently some negative acts and mistakes were committed in areas where the “Free Army” is present. How do you deal with such mistakes?

H: There are mistakes being made and we in turn deal with these issues no matter what they are. We even protect some public infrastructure at request from its administration, as we have done with the cement factory that was broken into by the regime’s supporters or ordinary thieves. We also formed a security committee to deal with these matters.

R: What is the role of the security committee? Is it a form of “revolutionary tribunals”?

H: Its role is to hold accountable the regime spies, thieves who are taking advantage of the current situation, and those manipulating prices taking advantage of people’s needs. But if you are referring to “revolutionary tribunals” in its literal and strict meaning then that is not the role of the security committee.

R: How are those people held accountable?

– H: According to their crime: in the case of a thief we arrest and interrogate him/her and if the crime is proven then we return the stolen items to their owners before releasing him/her. On the other hand, those found to be collaborating with the regime against the people leading to the death of innocents then the punishment is the death penalty.

No cases of revenge

R: What gives you the right to kill those proven to support the regime? And how do we know that these practices are not used as a cover up for revenge operations and tyrannical justice?

H: There are people still working for the army and security who provide us with information about those from the regime responsible for killing innocent people. I stress to you there were not any revenge killings in Al Rastan, but family feuds; for example that between Taqtaq and another family. Yet during the Friday of al-Ghadab (anger) young members of both families were together in the demonstration.

R: There are some reported cases of torture of those arrested by the “Free Army”. Don’t you think that this is just a repetition of the sort of practices that presumably ignited the revolution against the regime?

H: We have not committed torture the way the regime does. We do not humiliate people’s dignity; for example when dealing with thieves, we do not go beyond hitting them on the soles of their feet as a form of punishment. How are we meant to deal with someone who has stolen electricity cables off power poles?!

R: “Bastinado” [hitting people on the soles of their feet] is a form of torture…

– H: Correct, but we live in a situation of real war. We are not judges. Of course we need to continuously review and correct our mistakes, minor or major, to guarantee the success of our revolution and its integrity.

R: What is the extent of your relationship with the “Free Army” leadership?

– H: There is coordination with the leadership of the “Free Army” via defected officers in accordance with the chain of command.

R: Is there coordination between battalions around the country?

H: Coordination does exist but not in the form we desire. We still need time to organize ourselves due to the lack of supplies and equipment.

R: What does the “Free Army” need to turn from just being groups of defected soldiers or armed groups to a capable, organized and more efficient army?

H: The main requirement is weapons and then a field commander able to supervise the army on the ground.

> R: In your opinion, how will the regime be finally defeated?

– H: Through the three pillars of resistance: the continuation of peaceful demonstrations, the “Free Army”, and civil disobedience. It is essential to stop government institutions and infrastructure form working to paralyse the regime.

R: How do you describe the humanitarian situation in the city?

H: Very bad. Food prices have climbed sharply and fuel is in very short supply. Entire families were devastated as a result of the crimes of the regime, but what is surprising is that people’s spirits are really high. We are trying to supply free fuel to the people after seizing it from the regime.

R: As someone who took part in demonstrations before turning to weapons, what message do you want to send to those advocating peaceful and armed approaches respectively?

H: I say to advocates of the peaceful approach and to demonstrators to continue your peaceful activism as long as there is hope of a peaceful solution, because shedding blood is not an easy thing, and it is a much better option if the situation can be resolved peacefully even if this approach took a longer time. I say to those advocating an armed resistance, be careful and stay away from sectarianism, because the regime is playing on this chord, and I remind you not to treat anyone unjustly regardless of his religion or belief, and not to point your weapons at anyone except when it is necessary to lift injustice inflected upon people. There is no difference between Muslims, Christians, Alawites and Kurds… we are all Syrians and our cause is one. These words are not just propaganda; this is exactly what should happen if we really want to achieve the goals of our revolution.